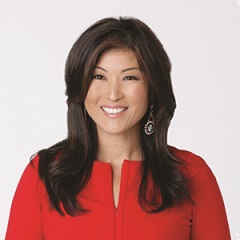 Juju Chang is an Emmy Award-winning co-anchor of ABC News’ “Nightline.” She also reports regularly for “Good Morning America” and “20/20.”

Chang has been recognized for her in-depth personal narratives set against the backdrop of pressing national and international news. Her exclusive television interview with transgender solider Chelsea Manning, after seven years in prison, explored issues of national security leaks and LGBTQ military service. Her profile of former firefighter Pat Hardison – after a groundbreaking face transplant – highlighted the crisis of organ donation. Additionally, Chang anchored a special edition of “Nightline,” “Consent on Campus,” from Penn State which tackled complex issues surrounding sexual assault.

Chang has also covered major breaking news for decades for ABC News, including Superstorm Sandy, the Orlando nightclub massacre and the Boston Marathon bombing. She has traveled around the world to report on global issues including a three-country trip through Central Africa on the front lines against Boko Haram in the latest on #bringbackourgirls, and to Honduras for “Femicide: the Untold War,” an eye-opening look at rampant violence against women.

A former news anchor for “Good Morning America,” Chang joined ABC News as an entry level desk assistant in 1987 and rose to become a producer for “World News Tonight.” Her first on-air job was reporting for KGO-TV in San Francisco. After a year in Washington, D.C. covering the White House, Capitol Hill and the presidential election for NewsOne, she co-anchored the overnight show “World News Now.” Chang’s work has been recognized with numerous awards including multiple Emmy’s, Gracie’s, a DuPont, a Murrow and Peabody awards.

Born in Seoul, South Korea and raised in Northern California, Chang graduated with honors from Stanford University with a B.A. in political science and communication. She is married to WNET President and CEO Neal Shapiro and together they have three sons. Chang is a member of the Council on Foreign Relations and a founding board member of the Korean American Community Foundation.